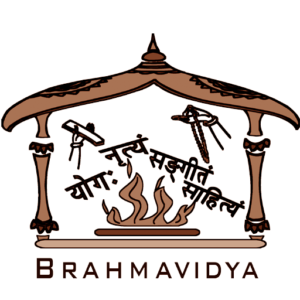 The main activities of the institution are teaching of the classical arts of Bharatanatyam and Karnataka Music, conducting many mini and major seminars, workshops, and lecture demonstrations by the visiting scholars and musicians, and inspiring new vistas into research and development in these fields. The institution has good and dedicated student strength from India and abroad. The institution is giving special training in Bharatanatyam and Indian Classical Music to Physically Handicapped and students from an Economically Weaker section of our society. In institution offers free tuition and other facilities to most of them and also other deserving pupils whose financial background makes it very difficult for them to continue to learn these divine arts. Brahmavidya is a twenty-five-year-old foundation for development, promotion, and research in Indian arts with an emphasis on Research in the main and cognate subjects. We believe that the Indian arts are forms of ‘brahmavidya’ in their plurality, function, and destination and that all art is a mode of worship of Truth, Auspiciousness, and Beauty. Our activities also extend to the promotion and teaching of Yoga and Sanskrit. Brahmavidya was established in the year 1989 with a noble thought of dedicating itself entirely to the promotion and dissemination of Indian Arts – both classical and other forms.

The institution has proposals to establish more bases in and around Karnataka for teaching and propagating true Indian art and values. Our institution has conducted many National level cultural activities like useful seminars, conferences, art–workshops, art–festivals, Folk and tribal cultural events. Brahmavidya has taken up a very special project of Acquisition of books, Manuscripts, Instrumentarium, equipment, etc. that are of immense and immediate use to its mainstream curriculum and research. It has also formulated and set in motion a very prestigious Gurukula project ‘Upayukta Bharata’ which, is a composite mode of imparting both theories and performing knowledge of Classical Music and Dancing.

Brahmavidya’s academic body is constituted of stalwarts in the field of Indian arts. Its main guidance comes from Mahamahopadhyaya Dr. R.Sathyanarayana (one of the managing trustees) who is a worldwide acclaimed authority on Indology and all its cognate subjects. Upayukta Bharata curriculum has Music, Dance, Yoga, Traditional Indian Theatre techniques, Modern Choreography, in-depth research, the recreation of the past cultural content, and contemporization. Upayukta Bharata is both inter– and intradisciplinary in nature.

The Brahmavidya is engaged in many projects of research, interpretation, and performance. The Ministry of Culture, Government of India, Kannada, and Culture Department of Govt of Karnataka and Sangit Natak Academi, New Delhi support many of these with Grant-in-aid. Another milestone in the achievements of the institution is the construction of a BHARATA SHALA, in Mysore. Starting from its Bhoomi pooja to Shala Pravesha functions were conducted according to the Prescriptions of Natya Shastra of Bharatamuni. Presently our Bharata Shala has an adequate Natya shala and two well-equipped rooms in which music classes are held and later used by our in-house students as their home (guru–griha).

Brahmavidya conducts many yearly prestigious Art Festivals and Seminars/Workshops. Amongst these are; Commemorative birthday celebrations of His Highness the late Jayachamaraja Wadiyar, Maharaja of Mysore and the last ruler of Karnataka on the 18th of July, every year at Jaganmohana Palace Auditorium, Mysore. Past Governor of Karnataka His Excellency Sri T.N.Chaturvedi, inaugurated the functions. And since then many stalwarts like Vice-chancellor of Dravidian Univesity, Former Minister in Government of India Sri K.H.Muniyappa, Sri Veerappa Moily, Padmavibhushana Dr. Kasturirangan, chairman, ISRO have inaugurated these festivals and have received felicitations on these occasions. Eminent Musicians and Scholars like Padmabhushana Dr. R.K.Srikanthan, Ganakalasri R.Rajaram, Shatavadhani Dr. R.Ganesh have received the prestigious ‘Chitprabhananda’ Award instituted jointly by the Institution and Urs Community (Mysore Royal Community). Many Socio-cultural services have been conducted on these occasions that have made this yearly event a national-level art festival. During these events, another pioneering movement was also started by declaring July 18th of every year as ‘Karnataka Composer’s day’ (Karnataka Vaggeyakara Day celebrations). It has become a very important occasion for musicians from Karnataka who have spread all over the world wherein they perform concerts based on the compositions of Karnataka (music) composers like Mysore Vasedevacharya, Sri Jayachamaraja Wodeyar, Mysore Sadashivarao, Veena Sheshanna etc.

Vakyartha Sabha: a unique conceptual Seminar on the study of Indian Texts on Music and Dance is conducted on yearly basis. Its first major session was held on the 9th and 10th of April 2012. Since then all sessions are conducted as Gurugruha events (on-house events in the home of the Guru or natyashala of the Institution) These are hailed in the scholastic fraternity as very worthy efforts by our institution. Our institution is now affiliated to Dravidian University, Kuppam, AP as a College for Distant and continuing education in fine arts. This has enabled young and talented aspirants and research scholars of our state to receive the various prestigious degrees and certificates offered by that University.